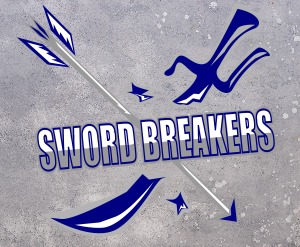 The first in a series of feature articles that will highlight the pioneers of our emerging sport.

Competition is nothing new to Raul Barrera-Barraza. Having competed in a wide variety of historical sword-fighting tournaments, the calculating and poised fighter jumped on the chance to explore a new discipline. Particularly due to 2020’s challenging pandemic circumstances, Barrera saw an opportunity to stay active and sharp despite the increasing social distancing restrictions in place.

His sword-fighting comrades call him the “Sword Breaker,” a nickname earned during a longsword tournament in which his opponent’s blade shattered mid-bout. Whether by chance or design, the name has followed Barrera and is now the name of the WarBow League’s first team.

Based in Santa Clara, the Sword Breakers play most of their matches at Davenriche European Martial Artes.

At the core of the squad are brothers Raul and Emilio. On and off the field, the sibling dynamic manifests itself in the occasional coordinated strike or unvoiced words of instruction. From an outside perspective, there is a definite sense of understanding between the two players that could only come from family.

Being the first team in a newly minted sport, the Sword Breakers are finding themselves pioneering strategies and tactics on the fly. “I’ve found myself trying to apply concepts and strategies I would [use] or have used in other sports and even some videogames,” says Barrera. “Sometimes they work and sometimes they don’t, but you never know until you try it.”

His methodical, experimental approach seems to be working. Over the last few games, the Sword Breakers seem to be improving and developing the first glimmer of a coordinated play style. The team picked up two wins during Season Zero in closely contested matches.

If one were to describe their current approach, “defensive” would come to mind. While one player ducks behind cover, others draw attention and deflect/dodge incoming arrows. During the course of a match, you’ll often see Raul taking up the role of a spotter, identifying potential threats. It’s quite fitting, as the name “Barrera” translates to “barrier” in Spanish.

However, the team strategy is still far from set in stone. When asked if certain players have begun to adopt team roles (i.e. the ‘Sniper’, the ‘Tank’, etc.) Barrera responded, “there are certain roles starting to settle, though I would say things are still fluid.”

One thing is for certain: the new sport is proving to be a complex, enjoyable activity. Commenting on his experience thus far, Barrera remarks, “it has been a great start and I like the flexibility of the type of events or drills that we can do. I’ve been interested in learning how to use a bow and I’m excited to take advantage of this opportunity to do so!”